skip to main | skip to sidebar

Why classic liberals don’t win elections, and populists do


We are in the midst of another election season in India, and each time a poll rolls around, I get depressed at the thought that we are about to elect criminals, corrupt populists, and members of political dynasties rather than upright, independent, reform-minded liberals.
On this occasion, l’affaire Sasikala and Donald Trump’s shocking win in America also weigh on the mind. As a solution, I have earlier advocated setting up a classical liberal political party in India. A young, aspiring India in the 21st century deserves a secular party that trusts markets rather than officials for economic outcomes and focuses on the reform of governance institutions. It may not win votes quickly but it would bring governance reform to centrestage and gradually prove to voters that open markets and rule-based government are the only sensible way to lift living standards and achieve shared prosperity.
Based on this reasoning, Sanjeev Sabhlok formed Swarna Bharat, a genuine liberal political party in 2013. But it has not gained widespread support. I feel guilty that I have not done enough for it; nor have my liberal friends joined it. As I think about our failure, I have come to a startling conclusion. I have realized that a party based on classical liberal principles has almost no chance of winning at the polls  unless it ties itself to an ‘identity’ party. 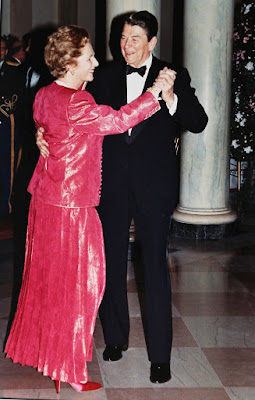 Dancing heads: Both Thatcher and Reagan were free market proponents


A populist candidate who promises subsidised electricity and food will always defeat a liberal who advocates private initiative and competition. It is hard to sell the free market at the polls because the ‘invisible hand’ of the market is not visible to the voter whereas the state’s visible hand is only too visible. A ‘left liberal’, however, is likely to be more successful as he advocates an extensive welfare state via state intervention.
For this reason, classical liberals everywhere have chosen to join parties with cultural or social identities. In America, they went on to become ‘liberal Republicans’ or ‘conservative Democrats’. In both cases, they helped to change the economic agenda of their parties.
But as a price, they had to put up with the ‘anti-abortion’ Christian agenda and the gun lobby of the Republicans and the rigid, inept unions of the Democratic Party. In the UK, Margaret Thatcher tolerated Tory’s social ideals of ‘traditional Englishness’ as a price for converting her party (and the nation) in favour of the market.
Similarly, Tony Blair taught the Labour Party to trust market outcomes rather than state intervention. Adenauer and Erhard, both classical liberals in Germany, tolerated the Protestantism of the Christian Democrats while creating the great post-war economic miracle. In a recent volume of essays, Liberalism in India, Jaithirth Rao has argued that even the most successful liberal party in history, the Whigs, who were a force in British politics for over two centuries, had a ‘Low Church’ identity in contrast to ‘High Church’ Tories.
In India too, many liberals support Modi’s vikas agenda but do not subscribe to BJP’s cultural baggage of Hindutva. Modi’s miraculous success at the polls in 2014 was the result of a liberal appeal of ‘maximum governance, minimum government’ to the aspiring young. As a result, he created space in the BJP for market liberals, and the BJP has matured into a full-fledged right-of-centre party with a clear division between an ‘economic’ and a ‘cultural’ right. Modi, however, is not a classical liberal like Thatcher, with ideological commitment to economic and institutional reforms. He is closer to an East Asian ‘moderniser’ and he reforms on a pragmatic basis. It is still early to say if Modi will deliver, but if he wants to retain his liberal supporters, he will have to keep the cultural wing of his party under tight control. As it is, the latter is unhappy with him for not pursuing Hindutva vigorously.
I feel sad that a liberal party does not have a future in India or elsewhere. Liberalism has driven political action in the world in the past three centuries. “It has won much of the political argument in the 20th century,” says Barun Mitra of the Liberty Institute. It won India’s fight for freedom from colonial rule; it was responsible for the collapse of communism; and it drove India’s economic reforms. But liberals did not take credit for these reforms and hence we continue to reform by stealth. Liberals are no saints but it is a shame that emotional appeals to race, religion and caste identities still matter more to voters than rational arguments for prosperity and governance.

Posted by gurcharan at 8:40 PM

There is an honest attempt by LokSatta party, which contested last two AP/Telangana Assembly general elections. Founded by JP Narayan, as a civil society organization, it eventually transformed into a political party based on free market principles and liberal ideology.

I request you to go through the stands and principles Loksatta stands for.

Thanks for sharing information.To get more details about
Latest Government Jobs Notification

We are uhe solid first platform for modeling newcomers to achieve there new dreams. The first to train and promote out models at our expense to avoid burden on them. Join the most popular agency if you modelling jobs in Delhi for female freshers, models, students, housewives aiming to start there modeling career. We are top modelling agency in Delhi offering modelling jobs in Delhi for upcoming female freshers or experienced models who want to join lingerie modeling agencies.

We are specialized in Mechanised cleaning of Underground and Overhead Water Tanks of all sizes. Door Step services across Delhi, Noida and Ghaziabad.

Battery Mantra Buy Car and Inverter battery online in India. BatteryMantra is Noida based India's No. 1 online battery store offering you genuine batteries of all the well-known battery brands at best prices.

gurcharan
Gurcharan Das is an author and thought leader best known for a much-acclaimed trilogy based on the classical Indian goals of the ideal life. India Unbound was on artha, 'material well-being'—the Guardian called it 'a quiet earthquake' – it is available in 19 languages and filmed by the BBC. The second, The Difficulty of Being Good, on dharma or 'moral well-being', is a contemporary meditation on the epic, Mahabharata. Kama: The Riddle of Desire is on the third goal, examining how to cherish desire in order to live a rich, flourishing life. He studied philosophy at Harvard University and was CEO of Procter & Gamble India before he took early retirement at 50 to become a full-time writer. He writes a regular column for the Times of India and five Indian language papers, and contributes to many international papers. His other books include India Grows at Night: A liberal case for a strong state, which was on the FT's best books for 2013; a novel, A Fine Family; a book of essays, The Elephant Paradigm, and an anthology, Three Plays. He is editing for Penguin a 15 volume history series, The Story of Indian Business. He lives in Delhi.