skip to main | skip to sidebar

Triple talaq is in the news again, and mostly for the wrong reasons. It represents a Muslim husband’s right in Islamic law to dissolve a marriage simply by announcing it to his wife; today, he even does it via an SMS over the cellphone. 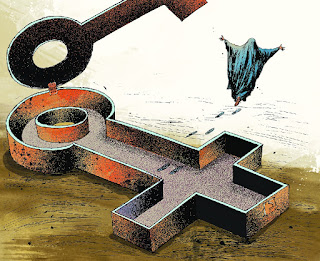 Despite Narendra Modi’s avowals to the contrary last week, the Bharatiya Janata Party’s zeal to abolish this controversial practice has more to do with its commitment to a uniform civil code and a Hindu Rashtra rather than compassion for a Muslim woman. The record of the Congress in this regard is no better. A Constitution bench of the Supreme Court will soon begin hearing a host of petitions challenging its constitutional validity and it’s difficult to predict the outcome. The solution, however, lies neither in a social boycott proposed by the Muslim Personal Law Board, nor a mere change in the law. The real answer is a radical transformation of the mindset.

To this end, it is important to understand how women have changed in history, from being mostly objects of male pleasure to free and equal human beings. It’s a useful lesson for not only Muslims but also Hindus, whose personal law may be more liberal, but its practice leaves much to be desired. While men and women are biologically unequal, society has historically institutionalised this into an inequality of power. Anthropological evidence suggests that prehistoric hunter-gatherer societies were more egalitarian; patriarchy or male dominance developed only after the invention of agriculture. Aristotle thought men were naturally superior and women’s role was only to reproduce and serve men in the household.

The early Christian Church formalised this inequality. Manu did the same in India. He believed women were morally weak and hence, dharma texts fashioned a social code of streedharma that conditioned women to accept a subordinate place in the patriarchal Brahminical society. Feminists argue that the stories of Sita, Savitri and others were created so that the woman would ‘voluntarily’ aspire to a subordinate role. Oddly enough, it was the discovery of romantic love in the 12th century which brought a degree of freedom and equality to women, breaking entrenched social barriers. Romantic love is personal, subjective, and idealises the beloved as a superior being; thus, it turns a woman into a subject rather than an object. It is a mistake to think that romantic love originated in the West. It seems to have blossomed in three different parts of the world around the same time, expressed in three extraordinary literary works. In Europe, it culminated in Bedier’s Tristan and Isolde; in Islamic Persia, it flowered in the romance of Nizami’s Laila and Majnun.

In India, it found expression in the divine love of Radha and Krishna in Jayadeva’s Gitagovinda. Prior to romantic love, there existed mostly erotic love, where a woman was an object, not the subject of love. Unlike India and Persia, the romantic movement evolved in the West, culminating in 18th century Enlightenment. One of its inspirations was the philosopher Immanuel Kant’s moral law — treat a human being not as a means but as an end — and this gave dignity to women. Modern marriage was born at the same time, based on love, replacing the old economic arrangement to raise a family. Women also challenged male domination by fighting for the right to vote in the 19th century and the Women’s Movement in the 20th century has gone on to effect profound changes in Western society, especially in marriage, including the “no fault” divorce, the right of women to abortion and property, as well as more equitable wages in the workplace.

All these ideas and practices have now spread around the world as a part of global modernity. Even though India retains its attachment to ‘arranged marriage’, it has gradually adopted features of the modern ‘love marriage’. Under the influence of Bollywood, urban middle class men are becoming less dominant and women less submissive. This trend will continue but we must avoid the breakdown of marriage and family of the West. Yes, the outrageous ‘triple talaq’ must go, but we must go beyond it. The minds and hearts of all Indians have to change in order to give dignity, equality, and self-respect to women. Changing the law is only the beginning, as Mahatma Gandhi used to say. Indians need to internalise the ideals of modernity, not as Western imitations, but in the way Gandhi thought of liberty and equality as emanating from sadharana dharma.
Posted by gurcharan at 1:40 PM

Nice blog !!! Awesome posts & information, i had Liked Your Blog & way Of Writing The Posts In Your website,Please Share More Information in Your Blog,Keep Going On And All The Best

We are uhe solid first platform for modeling newcomers to achieve there new dreams. The first to train and promote out models at our expense to avoid burden on them. Join the most popular agency if you modelling jobs in Delhi for female freshers, models, students, housewives aiming to start there modeling career. We are top modelling agency in Delhi offering modelling jobs in Delhi for upcoming female freshers or experienced models who want to join lingerie modeling agencies.

We are specialized in Mechanised cleaning of Underground and Overhead Water Tanks of all sizes. Door Step services across Delhi, Noida and Ghaziabad.

Battery Mantra Buy Car and Inverter battery online in India. BatteryMantra is Noida based India's No. 1 online battery store offering you genuine batteries of all the well-known battery brands at best prices.

gurcharan
Gurcharan Das is an author and thought leader best known for a much-acclaimed trilogy based on the classical Indian goals of the ideal life. India Unbound was on artha, 'material well-being'—the Guardian called it 'a quiet earthquake' – it is available in 19 languages and filmed by the BBC. The second, The Difficulty of Being Good, on dharma or 'moral well-being', is a contemporary meditation on the epic, Mahabharata. Kama: The Riddle of Desire is on the third goal, examining how to cherish desire in order to live a rich, flourishing life. He studied philosophy at Harvard University and was CEO of Procter & Gamble India before he took early retirement at 50 to become a full-time writer. He writes a regular column for the Times of India and five Indian language papers, and contributes to many international papers. His other books include India Grows at Night: A liberal case for a strong state, which was on the FT's best books for 2013; a novel, A Fine Family; a book of essays, The Elephant Paradigm, and an anthology, Three Plays. He is editing for Penguin a 15 volume history series, The Story of Indian Business. He lives in Delhi.